We are in the middle of another torrential downpour today and, at 8:00am this morning, Ray showed a distinct aversion to going outside.  Carol used to sail, a long time ago, and therefore has some very effective “wet weather gear” which I duly put on and went outside in an attempt to coax him out of the shelter of the back porch.

After a few minutes he decided that he would come and join me in the garden, where he immediately peed… and then dashed back to the shelter of the porch! Unfortunately, Ray missed his usual poop routine yesterday, due to his aversion to the weather, so I stayed in the garden and tried to coax him off the back porch once again. I think he eventually deduced that I was not going to let him back into the house, which was probably supported by a distinct desire to accommodate some bowel activity! Whatever the motivator was, it worked!

Our back garden accumulates water quite readily, and Ray has always side-stepped puddles. I understand that there is a basis for dogs not being comfortable in rain, but he has never played in puddles on the grass in the garden!

In Winter,  when we get the occasional spell of above freezing temperatures and snow and ice start to melt, Ray has always circumvented the wet areas! This will hopefully make our surprise at Wednesday’s performance more understandable. He has a history of running into Lake Ontario and thoroughly enjoying himself, but areas of water on grass and on sidewalks have always been things to avoid!

Regardless of his history with water, and regardless of the rationale behind his apparent inconsistencies, we had one happy dog with us on Wednesday.  Ray typically has a very plush and well groomed appearance but, after playing on Wednesday…. 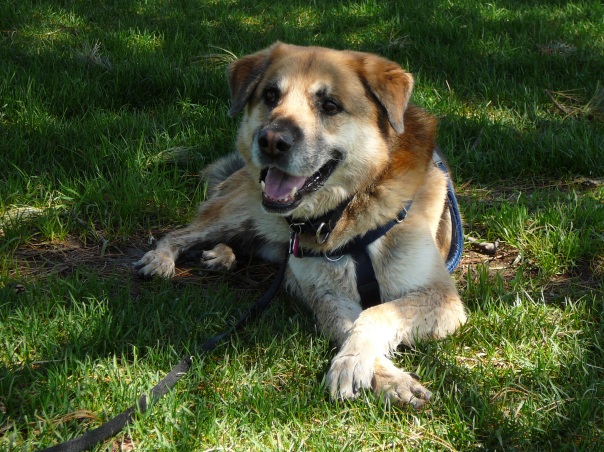 … he gave us the wet and bedraggled look!