As many of you already know, Ray’s history before being rescued from being a stray is an unknown. At his initial medical checkup at our local shelter, he showed no signs of physical abuse although his reactions to various circumstances suggested otherwise. He had no social skills to apply to either canine or human interactions, but simply defaulted to lunging and barking to display his discomfort. He was soon put on medication to reduce his anxiety level which, we were advised, is not unusual for German Shepherds and GSD mixes as they typically do not do well in confined spaces (adoption pens), especially when they have no place to hide if desired.

Fast forward 5 years and we took Ray downtown the other morning. As we came to a small park where we would normally cross the road, Ray did his usual detour through the park, and left a few “messages” for any dogs that follow during the day. As we exited the park, I was aware of an elderly lady not too far behind us.

We were about halfway across the road when I heard a voice and turned around. It was the elderly lady. She was now sitting on a park bench and clearly trying to get my attention so, not knowing quite what to expect, I turned around and went back into the park area while Carol continued with Ray across the road and then waited.

The elderly lady simply wanted to ask about Ray. How old was he? How long had we had him? What was his background.

She was clearly very interested in him but, after a few minutes, we bid each other farewell and I crossed the road to meet Carol and Ray. About half way across the road, I turned and looked back and the lady had a big smile on her face. I waved farewell and she reciprocated.

As soon as I rejoined Carol and Ray, I explained what had happened and Carol’s response was “Perhaps she would like to meet Ray?” Needless to say, we went back across the road and into the park with our now familiar “Say hello Ray!”

Ray went up to the lady, who had a huge smile as she gently stroked him. We learned that she used to have a dog many years earlier, and now just had a cat. She clearly enjoyed having the cat live with her … but still missed not having a dog around! Ray was his now typical Mr. Social (with the necessary treats) and, I am certain, made that lady’s day! 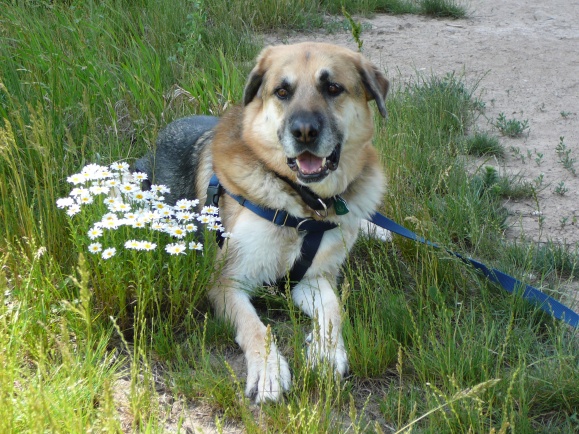 For anybody who wants to learn more about Ray, our first 18 months of living together are documented in my book “Who Said I was up for Adoption?” which is available direct from Friesen Press Bookstore, and also from Amazon and other on-line book retailers. Profits will be directed to the Oakville & Milton Humane Society.