Ray has come so far in the past 7 years (adopted March 2013), and he is still full of surprises. 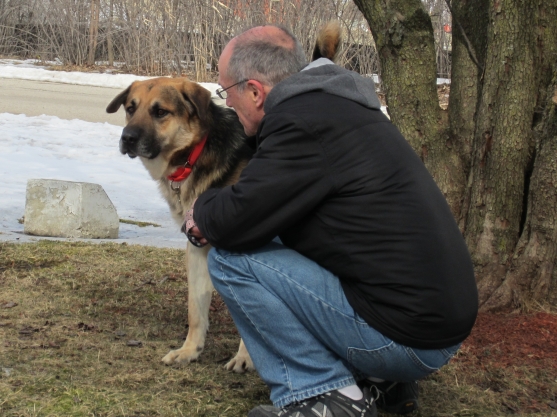 Those of you who have read “Who Said I was up for Adoption?” will probably remember that the adoption decision (whether to … or not) was resolved by an unexpected nose touch. Ray and I found some common ground at that moment. Since then, he has touched noses occasionally, especially when he is getting his tummy rubbed!

A week or two ago however, he surprised me again. He was laying on his side, on the floor, and looked as if he might appreciate a tummy rub so I lay down with him and started to stroke his tummy. He was very happy  and relaxed … and did something totally unexpected! He lifted his head up, and instead of giving me a nose touch, he put his head along-side mine and held that position for quite a few  seconds. From my perspective, it was total surprise and lovely gesture.

On February 1, we managed to get Heather (Ray’s favourite trainer/friend from the shelter) to sit with him while we went to a local concert. When we returned home, we had the usual chat about the concert and about Ray, and I noticed that while we were talking, he was chilling out on the floor and laying on his side. I went over to him and lay down with him, and started to stroke his tummy. Much as I hoped he would repeat his response of a few weeks earlier, I was not expecting it … but what a surprise I got! He gently lifted his head and placed it next to mine, fur to skin,  and after a few seconds he was back with it resting on the floor. Heather saw it and commented “That is so special!”

I  would have never believed this possible from the dog we adopted in 2013, but it just shows what can be done with lots of patience and TLC .

For the total scoop on Ray, “Who Said I was up for Adoption?” is available in eBook, paperback and hard cover formats. It can be purchased from all the usual on-line book retailers, and all net profits will go to the Oakville & Milton Humane Society, being the organization that initially rescued him, and worked with him in order to make him a feasible candidate for adoption.

The book cover link over in the column to the right, will take you to the amazon.com site where there are currently nine reviews.