In 1958, I became more interested in both the Empire Theatre (where Dad worked) and the Embassy Theatre (where Mum worked) because of the available complimentary tickets!

In fact the Embassy Theatre had more appeal because they regularly had singers and bands perform. These were usually artists who were not very well known, but who had established themselves as competent and were starting their entertainment career.

My autograph book now served its purpose because I wanted autographs from everybody who played there, particularly of course of those who I actually saw perform. 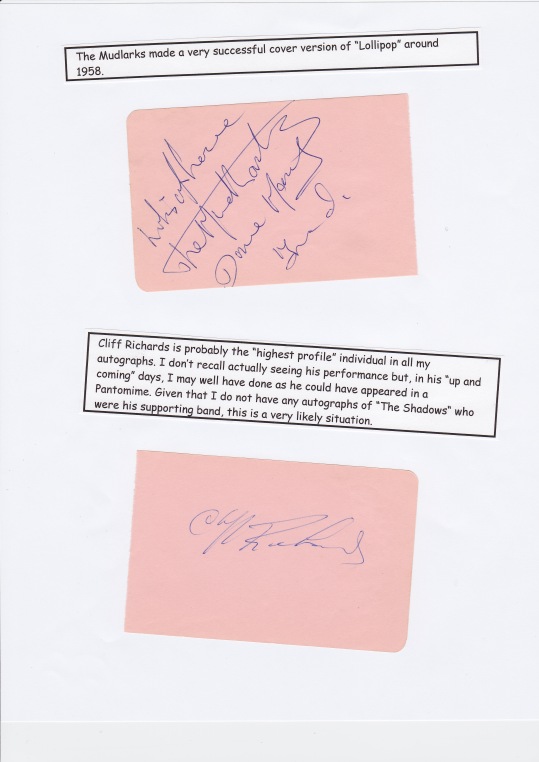 In addition to the above, some of the better known performers who signed my book were: Lonnie Donegan; Cherry Wainer; Dickie Valentine; Alma Cogan; Roy Castle, and Craig Douglas.

Next to the Empire Theatre, where Dad worked, was the Odeon Cinema. On Saturday mornings they had children’s’ films being shown and, I believe, the cost was minimal. Going there on a Saturday morning was a regular habit for a while and kept us kids busy! After the initial film clips promoting future films, we were treated to 2 or 3 short comedies which were ultimately followed by the “main attraction” which would be a humorous detective movie or perhaps a Western!

As for the Empire Theatre? Dad used to occasionally take both Valerie and I to help him paint some piece of scenery. We were really thrilled one day when he took us there and showed us a brick wall sketched out on a huge canvas. He had numerous pots of paint on the floor which he pointed to and said “These are your colours. I want all those bricks painted and the only rule is that no brick should be along side a brick of the same colour so mix them up however you want!” We had a great time. What really impressed me was how the scenery looked close up compared to how it looked from the auditorium. I was amazed at how a lot of dark lines and brown paint on a flat service could look like expensive mahogany paneling from a distance!