My second term at College was much more congenial. There was (obviously) a new intake of juniors and I was now JLC of a cabin*. Everything ran pretty smoothly and, again, I finished with a very high average.

The third and final term was significantly more pressured as I not only had the final examinations to prepare for, but during that time I had to find a shipping company to take me on as Navigation Officer Apprentice.

By this time, I had developed a very good relationship with an Officer (The Lt. Commander of the local mine-sweeper fleet) and he had a history with Blue Star Line. Blue Star Line was a very popular choice among the cadets because not only did they handle “clean” cargoes (refrigerated meat), but their ships also carried a small number of passengers so conditions on board were generally extremely good. It was suggested to me that I really should apply to Blue Star Line, especially as I was averaging over 80% in my previous examinations. I do not know whether that Officer got involved or not but, after going to London for an interview (1st Class train seating and at Blue Star Line’s expense), they welcomed me to their company, subject to satisfactory final examination results and a routine medical. Everything was looking good!

During the year, I had got to know many of my colleagues and, being a College with an International intake, many countries were represented. There were cadets from Iraq, Mauritius, Nigeria, Kenya, and no doubt various other countries.

Below is a photo of me with colleagues Nwoko (Nigeria) and Fernandes (Kenya). We were wearing our “day to day work uniform”! 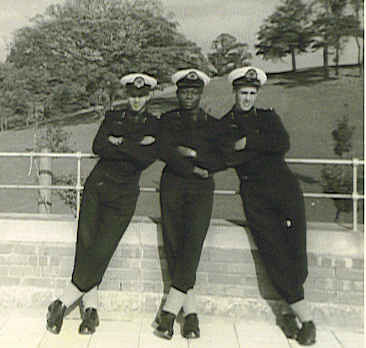 I finished that program in early December with a 2nd. Class Honors Certificate (Over 80% average), and returned home to await instructions from Blue Star Line.