The first thing I noticed from our building plot was that across the fields were often seen trains.

Little did I know (although I quickly found out) that this was the main East Coast route from London to Scotland and was therefore very busy. I also soon found that Walton (railway) Crossing was only a ten minute walk away. Between going to Walton Junior School, and Walton Crossing, there was simply very little time (or desire) for anything else! In fact my days consisted of school, going home for tea, and then down to Walton Crossing until it was bed time. I saved my pocket money and did odd jobs so that I could buy Train Spotting books, and spent many happy hours watching the different trains and logging their numbers. 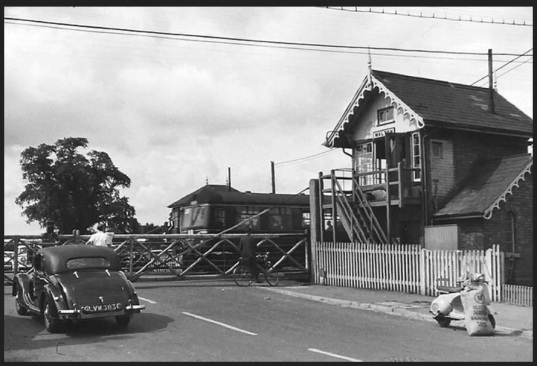 I spent many happy hours in the corner between the crossing gates and the signal box fence. Phil, one of the signalmen, used to come out to the top of the steps and chat with me during quiet traffic times.

While Phil always found the time to chat, another signalman (Fred) was always grumpy. His claim to fame with us trainspotters was his regular “Clear off! Go away1” His typical performance when we were there was to come rushing out of the signal box and down the steps. About half way down he would wave his arms around and utter his “greeting”! We talked about the idea of putting chunks of coal on the steps, and then make a lot of noise to lure him out and down them. We never did it but the thoughts over the possible outcome gave us many giggles.

Trains at Walton Crossing were awe inspiring. They made lots of noise, traveled very fast, and made a huge impact on an impressionable little lad …….. and they did not need to know my name! British Railways became my friend and companion for many years to come. In fact if I was at Walton Crossing, I was not only avoiding meeting visitors at home, but I was very happy in my own world of trains. Walton Crossing was especially exciting in the Winter months because it got dark before my bedtime so I was able to watch the trains go through lit only by the railway crossing lights and, as it was dark, who knows what rare locomotive might come through?

Living on Warwick Road in the mid/late 50’s was offering a certain level of stability in that I had been going to the same school for a while now. It was at this time that I had to go to special classes for foot exercises*. These consisted of picking up marbles with my toes, and no doubt some other exercises. The foot problem resulted in special shoes with the outside edges reinforced which were an additional drain on the family budget as they were not covered by the National Health Service.  It was made very clear to me that I had to look after those shoes!

*Much like the speech therapy classes, the benefits would appear to have been very questionable. When training for marathon running many years later, it surfaced that I had a leg length discrepancy of 10mm, of which my hip had absorbed 5mm. The difference was compensated by orthotics but, even with those corrective devices, I am still “hard” on the outside edge of my shoes.