I guess the first thing to consider when buying a garden pool for a dog is getting his opinion on the idea. We didn’t do that!

A second thing to consider is an appropriate size which, again, should include the dog’s opinion. We didn’t do that either. What we did do however is have Ray with us when we decided that he needed a pool to splash around in during the hot and humid times.

Eventually, of course, the pool was as full as we wanted it and so we invited Ray to try it out. Ray will respond to many requests that involve some movement on his part but none of them would persuade him to step into the pool. Carol had a stroke of genius and tossed a few pieces of kibble into the water! 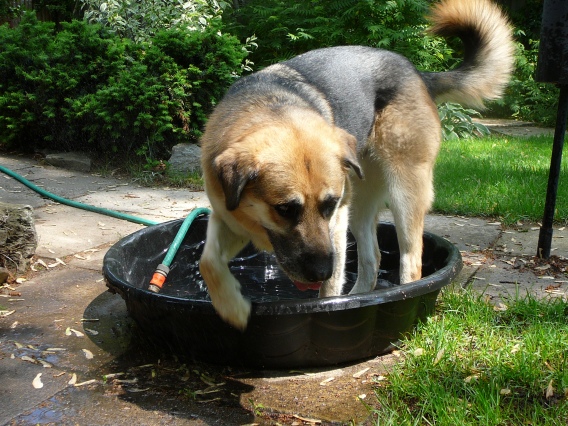 He was in! He found the kibble and promptly stepped out of the pool. We tempted him in again, and again, and he eventually stayed in there looking at the water (possibly his reflection). He started to paw at the pool bottom as if he was trying to determine something but we never figured out what it was.

Our next challenge, once he was in the pool, was to get him to sit, and then lay down. His sit was interesting because his rear simply hovered over the pool edge and so never touched the water. The “down” position was never achieved!

What we did notice however, and you can see from the pic, is that Ray barely fitted in the pool and the relative sizes posed a rather belated question – Is this the right size for him? Would he have been happier in a larger pool? Fortunately they are relatively inexpensive so we donated this pool to the Oakville & Milton Humane Society and bought Ray a larger one.

Did we solve the problem? No! He is currently still not interested in getting in unless offered an incentive but, as the Summer progresses, we shall see!

Revelation: On July 6th. we came back from a short walk (heat and humidity were quite high) and Ray immediately stepped into his new pool and paddled around! Maybe we’ll get him to lay down in it yet?