What do you see?

It would seem that we, as a species, do have a distinct tendency to pre-judge people. I agree that many of us try not to as we realize the flaws, but it does seem to be an intuitive reaction and, to make matters worse, it is generally done from a superficial view of the other person.

In pretty much any example I can come up with, the circumstances and characters involved could be assumed to be one thing, when in fact there are numerous other explanations. Is the car that just passed me, by driving on the shoulder of the road, an irresponsible idiot or an emergency response of some sort?  Is the police car racing through the traffic with all the flashing lights on, but no siren, really on a discreet emergency call, or just running late for a meeting at the donut shop? Is the parent whose child is out of control, and annoying people, really in need of a lesson in child discipline, or is that parent totally distracted by some recent devastating news? Whatever conclusions we may immediately come to, there are many others which could just as easily explain what we are seeing.

When you look at this photo, what do you see?

It is in fact a photo of me modelling a scarf for Melanie, my daughter. Now that you know that, what do you see in this next photo? Has your “story” behind the photo changed just a little?

Melanie had asked for scarves so we wanted to get some feedback on the styles and colors that appealed to her. Based on the photo below, does your interpretation of the photo change any further?

Needless to say, we had a lot of laughs doing this.

As some of you will know, Melanie is fighting a brain tumor and she had to have surgery which involved cutting a piece out of her skull. The radiation and chemotherapy treatment which followed caused considerable hair loss which exposed very clearly the scars from her surgery. Now look at this photo. 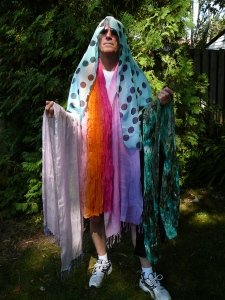