What’s in a name?

When we first started looking at OMHS* for a possible dog to adopt, the first one that was of potential interest was a large hound called Hank. It was not long after that when we contemplated a dog named Ray.

After Ray there was a Husky named Coltrane who was never a serious contender as we were not looking for an escape artist which, apparently, was one of his strengths, but he certainly was a lovely looking dog!

Given that a significant number of dogs in their care have no identification when picked up, we started wondering just how they came up with the names. These were just idle thoughts on our part until we had decided to adopt Ray and were thinking about what to call him. Ray was already responding to his name so our first thought was to come up with a name that had the same vowel sound. In effect we were trying to make a name change easy on him! After proposing a few ideas, we both kept looking at him and decided that he really does look like a Ray! Hence we kept his name!

During one visit to see Ray, we had been told it was Mike who had named him. We had seen Mike a number of times when visiting OMHS and so the next time our paths crossed, we asked him about the origin of Ray’s name. Mike was a music lover, and played guitar, so musicians were his immediate resource when asked to name dogs. He decided to call him Ray, after Ray Charles!

Ladies and gentlemen, allow me to introduce Mr Ray (Charles) 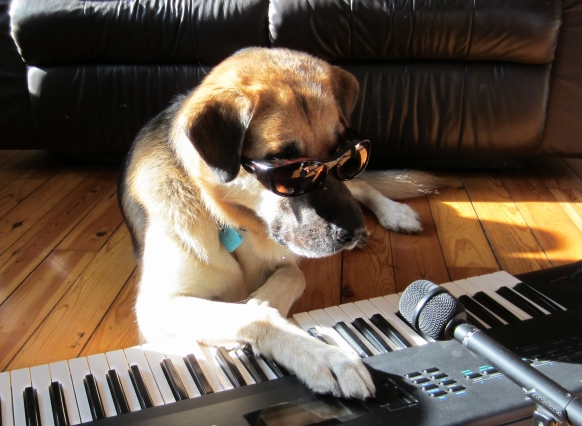 Coltrane? Of course …………….. John! Hank? Presumably either Williams or Snow!