Ray has generally been relatively controlled when surprised by unexpected noises. He will certainly jump occasionally, as evidenced once when a bus was next to us and its air pressure valve decided to release pressure at that moment, but in general he seems to be quite accepting of odd noises.

I learned very early in his time here that he is very good around construction sites. I would surmise that he probably survived, in his early years, by hanging around them  and enjoying many tidbits from the workers.

Fireworks present mixed reactions from Ray, that appear to be dictated by the proximity of the sound relative to him. Distant bangs are of little interest, but anything quite close can be cause for concern.

This past Monday was a national holiday here (Queen Victoria Day), and it is typically a time for fireworks. We do not participate for reasons which are hopefully obvious, but some of our neighbors do.  Late on Monday night, and after I had gone to bed, somebody very close to us stated  setting off numerous fireworks. Carol looked up to see how Ray was coping, and decided that a picture would describe the scene far better than she could. 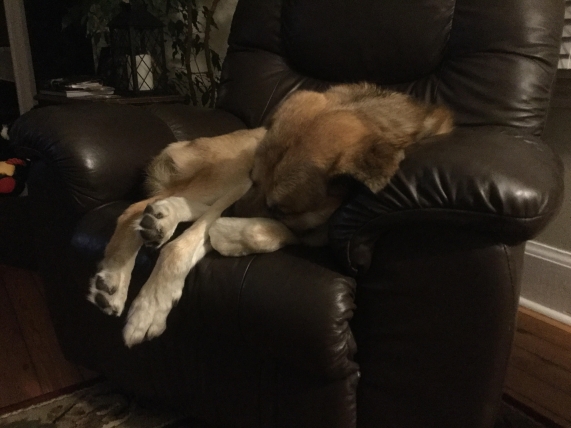 Being a stray for a while has to be an advantage when coping with human habits!