The thinking was that if 75lbs of attitude in a fur coat was going to charge through the shrub areas, then we should at least give him a path to follow which would minimize plant mutilation and destruction! The theory worked out quite well!

We also have a couple of sheds which are visibly masked from the house by swamp cedars. The sheds are on a concrete slab base and so are slightly elevated above the ground to keep them dry however, they are still prone to flooding if we do not keep the area around them clear of debris from overhanging trees.

Now let me introduce Ray into the scene. It was a lovely hot sunny day and we were all out in the back garden just enjoying the break and feeling free of any outside obligations. Ray wandered around as he usually did; picked one of his regular pee spots …… and did!; wandered around again, but then things changed.

On a “normal” day like that, he would either find some suitable place on the grass and collapse in a furry heap, or would chill out in a rather more regal style with his front paws crossed. He would then just lay and watch for anything that might be happening in his garden. If we were sitting at our picnic table and chatting, he would generally lay on the patio very close to one of us and supervise from there!

Because we are quite heavily over shadowed by trees, there are numerous places that would have been comfortable for Ray to chill-out on a hot day both on the grass, on the patio, and even on his concrete slab pathways. However, Ray decided to totally destroy any predictions that we would have made about his imminent plans.

After wandering around the garden, he decided to go to the sheds. We thought (naturally?) that he had picked up a scent and was going to check it out, but that was not the case. We watched him with great interest as he was clearly trying to come to terms with something. We watched him as he suddenly turned away from a shed and headed into the swamp cedars (ref 2nd paragraph).

For a brief moment, we wondered what he was doing when suddenly it all became very clear. He went into a very aggressive digging mode and propelled ground-cover plants, twigs, other plant debris and a large amount of soil directly behind him until he had scooped out a fairly large area. He then promptly lay down in his very own “nest”! 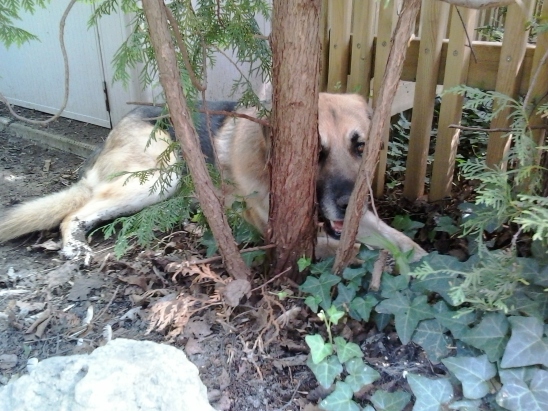 I had to remember that the next gardening session must include clearing the ground around the shed, preferably before the next rain!