Today (Friday) could well be our last day of “tshirt and shorts” so we decided to take Ray down to the lake, and then work our way back through the town with the inevitable Lululemon stopover!

Ray, as expected, became quite excited when he knew that we were heading for the lake and totally enjoyed himself paddling around and grabbing sticks. 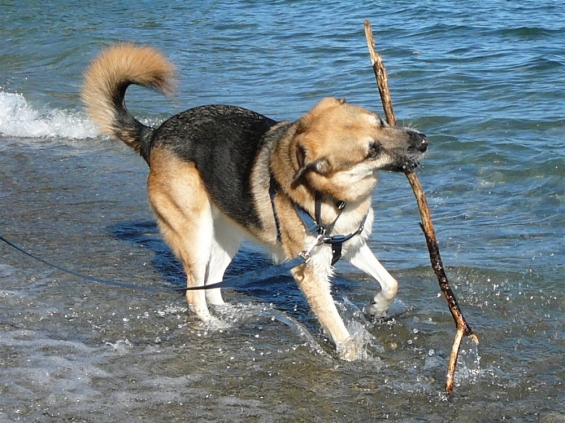 Of course who can resist chomping on a large stick fresh out of Lake Ontario?

After probably 5 minutes, he started to wander up onto the grass, and clearly wanted to follow the trail. We went along with him and knew exactly what was on his mind…. biscuits at Lululemon! He was not disappointed.

With the exception of us guiding him across the roads (he has no concept of traffic whatsoever), he pretty much took us directly to Lululemon. The biscuit bowl was outside, together with a water bowl so for Ray it was perfect. Leaving Lululemon presented the usual challenge of him not understanding why we were walking away from a bowl still full of biscuits, but he eventually acknowledged that we were leaving and , apart from trying to go into every clothing store we passed (they probably all smell like Lululemon to him!), we had an uneventful walk home.

Carol and I did stop at an outdoor patio and sipped lattes while Ray chilled out under the table, which was very nice. Soon the patios will be shut down and the weather not so conducive to sitting anywhere outside but today… it is still Summer. Tomorrow? Who knows!

41 thoughts on “One more Summer day!”