What is wrong with them?

I have little to say about FB that is positive. My Posts are automatically copied there in order to give my stories about Ray, and my books a little more exposure, but any further use of FB seems to be highly questionable.

Because books cannot sell without exposure, I have also decided to follow a number of dog specific FB pages … a decision which is also seems to be highly questionable.

Just recently, some individual posted a comment on a very dog-breed specific site, which condemned the breed! Once the inevitable back-lash started, the dialogues deteriorated to a level that I might expect to see on a washroom/toilet wall in a school. The “hate the breed” campaign eventually expanded to insults over education levels … to racial slurs … to personal affronts.

All the things that I thought we, as a species, were slowly trying to  overcome, were being displayed on my computer screen.  I could go on and on about the clear lack of understanding; lack of tolerance; lack of compassion etc. but, while reading the abuse, my dominant thought was “Why? What purpose could possibly be served by deliberately antagonizing a group of dog lovers?” The answer I suppose is complex, but possibly simply for attention at any price? To vent personal frustrations? To establish some significance in a life where they have none?

Given the world-wide reach of FB, it would not be practical for me to pursue an explanation, but I do think that perhaps my school washroom/toilet reference earlier may be pretty accurate. It seems that having access to the internet is a high priority both for adults and their children … and perhaps it is the children who have yet to learn the advantages of diplomacy, discretion and basic good manners.

“Be the world that you want it to be”

“Treat people the way you would want to be treated.”

As for the moderators who allow these dialogues to continue? That is just totally irresponsible.

As for dogs? Who would not want to have a nap with this “boy” alongside you? 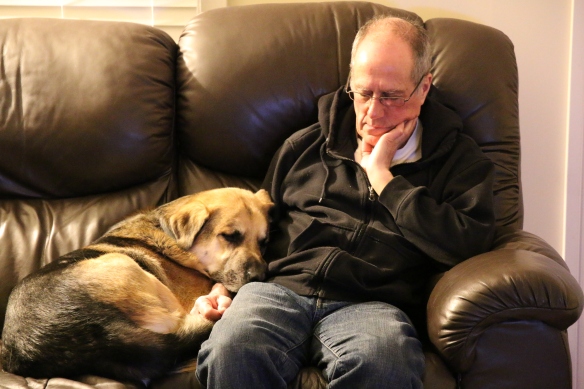 41 thoughts on “What is wrong with them?”